Eventide’s investment philosophy is rooted in the biblical understanding that God’s great intent for business is that it serve and, in turn, bless humankind . . . and that companies that prosper best, and sustainably, are the ones who do this especially well.

Accordingly, Eventide seeks to invest in companies that operate with integrity and excel at creating value. In so doing we enlarge the capacity of these businesses to create still more value, including for our shareholders. Just as importantly, Eventide tries to avoid investing in companies that engage in predatory behavior or seek profit at all costs — practices which harm customers, society, and eventually shareholders.

This not only gives Eventide investors the potential for outperformance, it also provides a compelling opportunity to invest intentionally in companies whose products and practices bring real blessing. This is the essence of biblically responsible investing — and for Eventide and its investors, we believe that this is truly ‘better investing . . . for a better world.’

We invite you to engage with the interactive diagrams below to more fully understand Eventide’s distinctive investment philosophy — and how our deep, biblical appreciation of business and investing leads to decidedly different choices from other fund managers.

You can also download an overview of our Business 360 approach to evaluating companies.

Conventional investment fund managers base their decision on whether/how much to invest on a single criterion: earnings.

The Problem(s) with Earnings

The obvious problem with earnings is that actual financial results are always a lagging indicator. They provide considerable insight into past performance, but little insight into whether a change in financial performance — and investment outcomes — is lurking just around the corner.

The more serious problem is that earnings can be ‘gamed’ so easily and successfully (though not indefinitely). Companies can temporarily boost profits/earnings in ways that mask, and even sap, their long-term prospects. Inevitably there comes a day of reckoning. Investors are left holding the bag. Beyond these practical issues, a narrow preoccupation with earnings flows from a flawed conception that the purpose of business is to make money. God’s intent is something larger and better. He intends business to create value and blessing for humankind. Companies who do this well achieve earnings that grow attractively and sustainably.

Eventide invests in companies who we believe are especially good at all of this — companies who are exemplary at creating the value and blessing God intends through business and, as a consequence, at achieving the attractive, sustainable returns that come as a reward.

Moral/ethical fund managers believe that the products of certain companies make them morally, or socially, inappropriate investments. Put simply, they believe these companies provide products that cause harm and should, therefore, be considered ‘bad’ companies — and off limits for investing.

‘Socially-responsible’ managers tend to exclude companies whose products/practices do significant environmental or social harm, e.g., a strip-mining company, or an armaments firm. ‘Morally-responsible’ managers, typically operating from a Christian perspective, characteristically exclude companies involved in abortion, companies who pointedly support gay marriage efforts, and traditional ‘vice’ industries like gambling, pornography, tobacco and alcohol. Note, however, that once the moral/social managers apply their respective exclusionary filters, they then join with conventional fund managers in focusing the bulk of their investment decision process on earnings.

Eventide is sympathetic to the ‘responsible investing’ viewpoint, but would offer three critiques:

In the broad middle of the Eventide Investment Assessment spectrum, thoughtful viewers may question how accurately one can really assess where a company should rank and, in particular, how easy it is to precisely distinguish the ‘Poor’ companies from the less ‘Bad’ companies. We agree. We happily leave to others the unrewarding task of determining which mediocre companies may be slightly better, or worse, than others. Eventide has a higher and more rewarding goal. We strive to identify and invest in the standout companies — the ones in the highest echelons of value creation and blessing. These companies wonderfully fulfill God’s purpose for business and, in the process, create attractive, sustainable value for investors as well.

More Info What About Shareholders?

Notes on the 360 Assessment Framework:

The first question the 360 Assessment brings to mind for many investors is ‘why aren’t shareholders represented on the 360 Impact Map?’ After all, aren’t shareholders at least one of the important constituencies that business should serve? Very good question. The answer is slightly subtle — and terrifically important. First off, we want to make clear that shareholders should appropriately expect to benefit from their ownership investments. Part of the ‘magic’ of capitalism is its ability to funnel self-interested capital to business through public ownership.

But here’s the slightly subtle part: when business pursues directly its own/shareholders’ financial betterment, its actual ability to deliver shareholder gain deteriorates. When, instead, business focuses on creating value for others, its ability to deliver sustainable, long-term earnings grows attractively.

Roger Martin, dean of the University of Toronto business school, discusses this thoroughly and empirically in his excellent book, Fixing the Game. His conclusion: pursuit of shareholder value maximization doesn’t maximize shareholder value. Even on its own terms, pursuing shareholder value directly doesn’t work.

Why is that? To quote Steve Denning, a business author and Forbes columnist who writes regularly on this topic: “A [direct, priority] focus on maximizing shareholder value leads firms to do things that detract from maximizing long-term shareholder value, such as favoring cost-cutting over innovation . . .pursuing ‘bad profits’ that destroy brand equity, and excessive C-suite compensation”. The result can be seen in the disastrously declining ROA and ROIC over the last four decades (the same time period during which ‘maximizing shareholder value’ became the prevailing paradigm for many corporations) in large US firms as documented by Deloitte’s Shift Index. 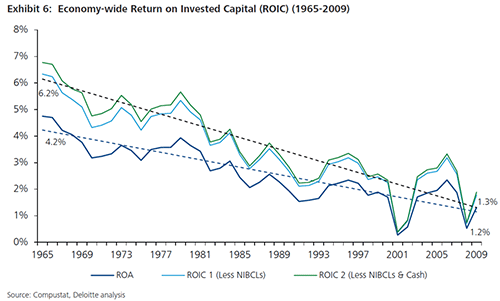 Fred Reichheld, a Fellow at Bain & Company and founder of their Loyalty Practice Group, discusses much the same idea in his seminal book, The Ultimate Question, published in 2006 by the Harvard Business School Press. His comprehensively empirical conclusion: companies who prioritize creating customer value, and treat profits and shareholder return as a byproduct, achieve decidedly superior growth and profitability versus companies who focus directly on financial return.

The Eventide Business 360 Assessment reflects, and extends, that same understanding. When business serves well its customers, and its other constituencies, it prospers attractively and sustainably. But when its focus turns inward, when it seeks first to serve its own/shareholders’ financial interests, it loses its ability to make money by creating value for others. In fact, it begins to move from value creation toward value extraction — and starts a slow slide toward toxicity.

For readers of Scripture, this should all have a familiar ring. Jesus famously says in the Gospels, “Whoever wants to save his life will lose it, but whoever loses his life for me will find it.” Jesus here gives insight into the fundamental contrast between the way the people of ‘this world’ understand life and its dynamics versus the way God understands life and the way he has, in fact, structured its operational dynamics.

Paraphrasing broadly, Jesus says, “I know that you have an instinctive bias toward your own happiness, and a belief that pursuing your (seeming) self-interest is the surest, most direct way to that happiness. But don’t be misled, that pathway actually leads to ruin. Fulfillment, happiness, prosperity all lie in the opposite direction. Seek first to serve others. You will be a blessing to them and will find — counterintuitively, and by God’s grace — your own life richly blessed as a result. Service, not selfishness, is the true pathway to life and blessing.”

So, is profitability/earnings important? Absolutely. Can a business serve its own and its shareholders’ interests well by prioritizing the pursuit of profits/earnings? Absolutely not. The Eventide Business 360 Assessment, therefore, focuses on the constituencies business is called to serve directly. When business does that well, its shareholders are blessed in turn.